Turns out that my latest editorial endeavor -- In the Dugout: Yankees 2013 from the fine folks at Lindy's Sports, which I've been calling the 2013 Yankees Annual in my ignorance -- is now available! The 112-page volume, co-edited by me and the mighty Cecilia M. Tan, can be ordered directly from Lindy's or found at your local bookstore's magazine section or at your local newsstand.

Look for this cover: 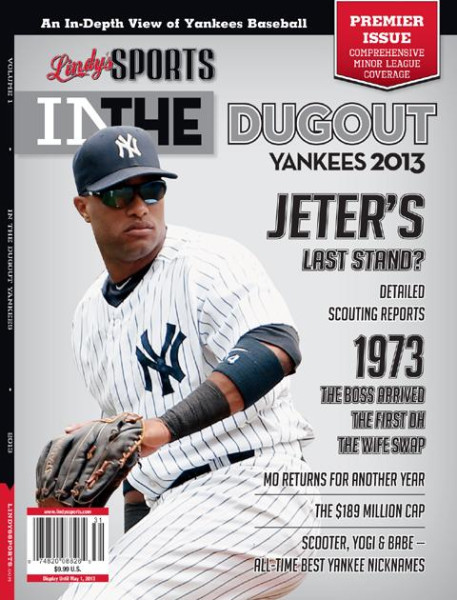 Data has amnesia and reenacts Frankenstein. Troi decides she should be able to run the ship at a time other than a major disaster, and gets to kill La Forge (kinda). The TNG Rewatch is this above all: "Thine Own Self."

The high concept of Data doing the 1931 Frankenstein (I emphasize this because all the resemblances are to the movie, not at all to the Mary Shelley novel) is a strong one, but the episode never seems to get past it. We’ve been down this road before with Data in “Time’s Arrow,” but that episode had some humor value (the poker game, e.g.) plus Data was investigating something that the viewer was also learning about as the episode progressed. Here, we know it’s the probe fragments that are causing the illnesses, and we don’t have anything else to hang our interest on beyond Brent Spiner’s usual fine performance. His relationship with Garvin and Gia doesn’t really have any life to it (he had more of a rapport with Sarjenka in “Pen Pals” with considerably less shared screentime), and Skoran is too much of a straw villain to be taken seriously as a threat. The only thing I really liked about the sequences on Barkon were the scenes with Talur, beautifully played by Ronnie Claire Edwards, who provides a perfect balance of post-Enlightenment progressiveness with pre-Industrial Revolution ignorance.

One of the brightest lights of the SF fan community, jan howard finder, a.k.a. "Wombat," died today of complications from cancer. He was, as the saying goes, older than dirt, and he'd been having health problems for ages, so this wasn't entirely a surprise, but it still sucks.

While the last time I saw Wombat was briefly at Arisia last month, the last time I spent time talking to Wombat was at Albacon, a convention he helped found, last fall. In fact, the first time Wombat and I seriously talked was at the first Albacon in the fall of 1996, but we became fast friends, and then 16 years later, I was Media GoH and he was Fan GoH at that same con. I loved talking with him, mainly because you could have a lengthy conversation with Wombat about, well, anything. He was brilliant, funny, charming, smart, sensible, hilarious, intelligent, and just overall magnificent.

Some time in the 2000s, he shaved his beard for reasons known only to the voices in his head. Both

terri_osborne and I agreed that he looked better hirsute than clean-shaven, so every time we saw him, we chanted, in perfect chorus, "GROW IT BACK!" and he would just fall over laughing.

wrenn summed him up perfectly: he was like a teddy bear.

The world is a lesser place without him in it. Rest in peace, my friend.
Collapse