I got a new TV for the bedroom over the weekend, and it's a flatscreen (so we now have two). This necessitated trading out the existing cable box for a new HD one.

Now Plan A was to do this yesterday. See, I had to drive Dale to what turned out to be his final foot doctor appointment on Monday. On days when Dale has (had) to see the doctor, I drove Wrenn to Metro North so she could get to work and I had the car to drive Dale. Wrenn travels from a station that's across the street from an Optimum store--

So today I had to take the bus for an hour each way to get to the one that was actually, y'know, open and stuff. At least I could work on the bus....

After I got home, I took a quick nap, then went to the dojo for regular class and fighting class, the latter for 15 rounds. *whew* But I feel good.

Troi investigates a suicide, and then things get really really weird. The TNG Rewatch is in the "Eye of the Beholder."

Nancy Harewood and Johanna McCloy are barely adequate as Nara and Calloway, respectively—though I would’ve expected the love of Kwan’s life to be a lot more broken up. I mean, Jonathan Frakes showed more emotion over Kwan’s death than the woman playing his girlfriend. As Kwan, Tim Lounibos does the best he can with a part that just calls for him to stand in place muttering seeming nonsense before jumping. Longtime extra Nora Leonhardt gets something resembling a speaking part—no dialogue, but she gets to scream and laugh—as the image of Finn. (Amusingly, Leonhardt also was Marina Sirtis’s usual stand-in, but her role as Finn kept her from doing that this episode, so that role went to Second Assistant Director Arlene Fukai.)

So I'm in a Barnes & Noble in midtown Manhattan, as I'm running errands in the neighborhood, and I want to see if they're shelving the Leverage novel. I can't find it in the Mystery section, which is where I figured it would be, nor the Science Fiction/Fantasy section, which I could see the argument for, though it would be stupid.

Nope, not either of those places. Instead, it's in Fiction & Literature: 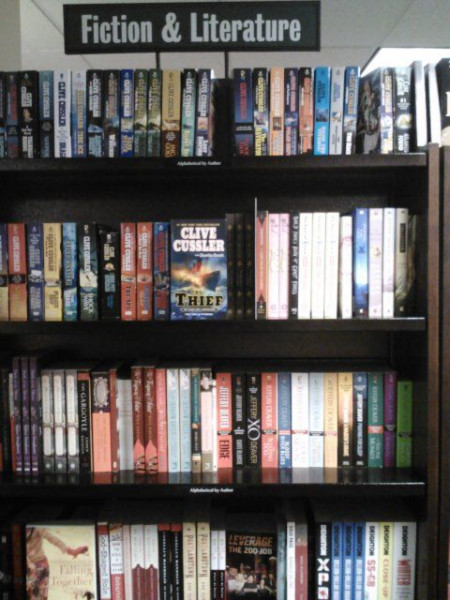 Look, it's even faced out! 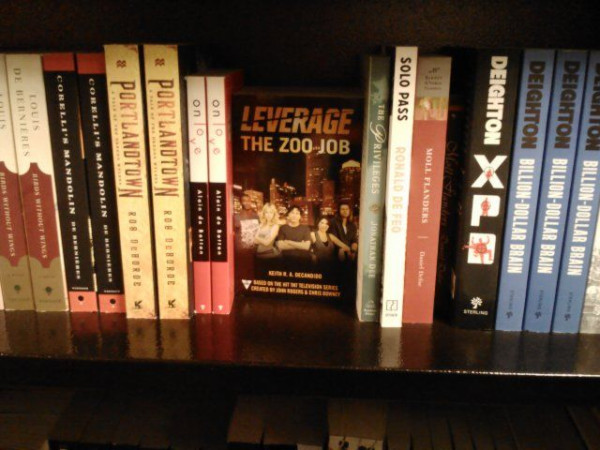