The first day of promotion is generally the basics: the simple techniques that we all learned as white belts, plus some combinations that we're all supposed to know (some are a little more advanced than the white-belt level, and the four of us going for nidan also had to do a black-belt combination). On several occasions, other black belts were pounding us and pushing us and trying to force us out of a stable stance, to varying degrees of success.

It was exhilarating, exhausting, intense, brutal, awesome. We were pushed very hard for two hours and I was making old-man noises when I got home. But I also feel like I'm really a third of the way to earning that second stripe on my belt.

At one point, Shihan said, "This is what you've been training for." Which was certainly true up to a point, but what I'm looking most forward to is what's on the other side of these four days we'll be getting the shit kicked out of us. *wry grin* There's so much more I want to accomplish, both as a student and as a teacher, once I become a nidan. And this is the road through it.

And it's exhilarating, exhausting, intense, brutal, and awesome. *big grin*

Tomorrow and Friday day I rest up, work on The Project That Cannot Be Named (Yet), and get ready for day 2......

This seems apropos for the first day of black-belt promotion. The Carl Douglas classic.....

My mother got me a nifty mug as a no-real-good-reason, just-for-the-hell-of-it present. It simply says, "THE KID." She got it from Twisted River Clayworks on Etsy. 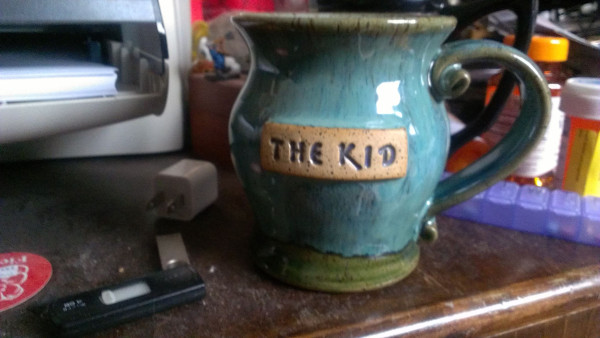