After a grueling 31 rounds of fighting -- 16 two-minute rounds, 14 one-and-a-half-minute rounds, and a final two-minute round -- against fourteen black belts, all of whom are strong, powerful fighters, a couple of whom regularly compete in international fighting tournaments and often win them, I am now, at last, a second-degree black belt.

I'm coming down with a cold, but thanks to the magic of cold meds, I was able to survive it without too much problem. Which is to say I'm only mostly dead as opposed to all dead.

At the end of it, Shihan gave all five of us our belts. I actually have a new belt, as my old one was a size too small, so he had a new one made for me: 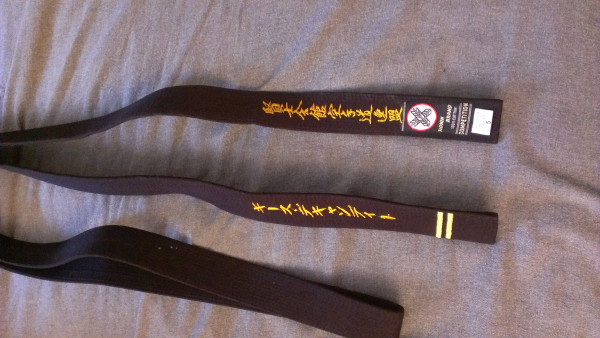 The top is the name of our association in Japanese kanji characters, the other end of the belt has my name in katakana characters over the two stripes that indicate that I'm now a nidan (second degree). Well, an approximation of my name, anyhow. When I got my first-degree belt, I was told that my first name was listed as "Kiisu," as there is no TH sound in Japanese.....

I might post more about this last day, which was the most grueling part, but right now I'm totally fucking exhausted. *laughs* Wrenn and I are gonna go have some lunch at a local diner, as I'm in desperate need of food.

The news (such as it is) broke on Twitter, so I can stop being coy about it: I'm the newest contributor to the Pinstriped Bible, a New York Yankees-focused feature on SB Nation. I'll be nattering about the Bronx Bombers every Monday for PB, with my first piece going up tomorrow on why I don't watch spring training games (plus some confusion about the Vernon Wells trade, which broke while I was writing the piece).

(I hasten to add that this is not The Project That Cannot Be Named [Yet]. This is something else.)

I'm really excited about this, and I have to give thanks and praise to Cecilia M. Tan, my cohort on In the Dugout: Yankees 2013, which included a piece by PB's creator and guru, Steven Goldman. Steve liked my "12 and 12 in '12" piece for that volume enough to give me a gig writing once a week for his Yankees blog, and here I am.

It's weird, baseball's always been a hobby more than something I've pursued professionally, and yet, here I am, doing it professionally, after a fashion. I've written about the Yankees before, for two other annuals with Cecilia, as well as The Red Sox Fan Handbook 2005 and the "Bleacher Creature Feature" e-mail newsletter/proto-blog that I did a decade ago. I've also made occasional contributions to the Replacement Level Yankees Weblog in the past.

Still, this is my first real sportswriting gig, sorta, and I have to admit to being excited and eagerly looking forward to the opportunity.