In the wake of the overwhelming pessimism about the 2013 Yankees, I present some optimism in "Reasons to be cheerful, part 13" on the Pinstriped Bible.

First of all, I have yet to jump on the Blue Jays bandwagon. Yes, they acquired half the Marlins roster, but where many focus on the word "acquired," I prefer to focus on the word "Marlins." Expecting both Melky Cabrera and Edwin Encarnacion to repeat their career years rather than be the player they were every other year prior to that is optimistic as hell, and I don't think playing 81 games on turf will do anything good for what's left of Jose Reyes's legs. There's a lot more wishcasting in Canada than I think people are realizing.

I took the title from my Pinstriped Bible piece today from my second-favorite song by Ian Dury and the Blockheads, "Reasons to Be Cheerful Part 3," which I remember loving when I was a kid, particularly the refrain of "Why don't you get back into bed?"

It's now an official cover! Coming in August 2013 from Plus One Press will be the urban fantasy short story collection Ragnarok and Roll: Tales of Cassie Zukav, Weirdness Magnet. 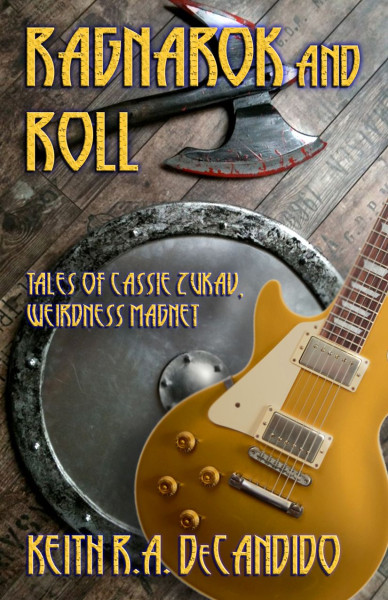 Here's the back cover copy:

Cassie Zukav has always been a bit of a weirdness magnet. Strange things always happened to her even before she came to Key West for vacation, and never left. She's dealt with sea monsters and nixies and dragons, and shares her room with the ghost of an old wrecker captain, whom only she can see and hear.

Now she spends her days leading scuba diving jaunts and her nights at Mayor Fred's Saloon watching the house band, 1812, rock the joint. But when 1812 takes a break, they're replaced by Jötunheim, a band everyone but Cassie loves. Their lead singer is Loki, the Norse trickster god, who is trying to bring about Ragnarok—the end of all that is. Cassie learns that she's a Dís, a fate goddess, from Odin himself, the Allfather of the Norse gods.

She's the only one who can stop Loki from destroying the world. And then things get really weird...

Here are eight stories of Cassie's adventures in Key West, from her encounter with a rock and roll star who's not what (or who) he seems, to stopping a water elemental from killing one of her friends (by marrying her), to the ghosts on the island all becoming active (and destructive), to a surprise appearance on the island by Thor, the thunderer. Plus, as an added bonus, the first-ever Cassie story, back in print!