Dark Quest Books has released the cover to Tales from Dragon Precinct, the short story collection of tales featuring the Cliff's End Castle Guard, which will be released in May at Balticon. The cover has artwork by Jenn Reese and was designed by Mike McPhail. 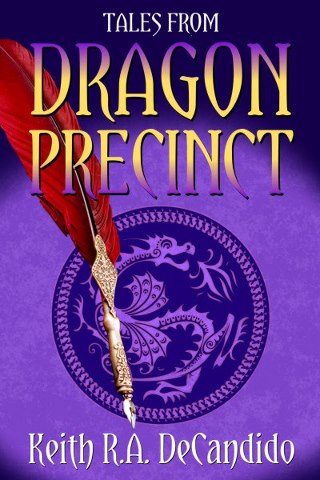 The table of contents includes five reprints of stories that were originally sold to anthologies between 2004 and 2011; one story I did as a Kickstarter last year; and four new stories new to this book. I've been reading the new ones on my monthly podcast, Dead Kitchen Radio (specific links in the list below to those episodes; I'll be reading "Blood in the Water" on the May podcast).

Here are the stories:

In 1986 (the year I graduated high school), Run-DMC was on top of the world. Aerosmith had fallen into relative obscurity. It's easy to forget that now that it's gone the other way around (Run-DMC officially broke up when Jam Master Jay was shot and killed in 2002, though "Run" Simmons and Daryl McDaniel have gotten together again here and there), but Run-DMC got together with Mssrs. Tyler & Perry to do a rap-tinged remake of Aerosmith's "Walk This Way." Indeed, this remake put Aerosmith back on the proverbial map.

Even now, 27 years later, it's a radical melding of rock and rap, and of white and black, that you rarely see, and it's an absolute joy to watch. If you can't watch this video without a big grin on your face, you have no soul. So there.