Back home from Dexcon which was -- okay. Personally, I had a great time, seeing lots of good friends (Becca, Dani, Brad, Barbara, Rowan, Laurie, C.J., Diane, Anthony, James, RoByn, others I'm sure I forgot), meeting some new ones (Haya, Terry, Weasel, Jenn, Danni, Katie, Meaghen, the various folks I played games with, the delightful folks sitting next to me in the dealer room, and many many more).

Professionally, it could've been better. Sales were nonexistent on Friday (literally, I sold nothing), and then Saturday late afternoon was only mildly better, but things picked up a lot on Sunday. I only broke even on the weekend, and that just barely.

Still, I got to have some fun, including playing a few games: Facts in Five, a Star Trek RPG (involving Mirror Universe characters), and I participated in a Texas Hold-'em tournament (I went out pretty quickly, losing on the last card of a three-player all-in showdown; ironically, the last card made my hand better, going from one pair to two pair, but the card also gave another guy a flush). And I at least got a story out of Saturday night's dinner. Brad Handley of Mystik Waboose and fellow Dark Quest minion Dani Ackley-McPhail went out to a local diner that Brad had been to before. The food was uniformly awful (Brad's gyro had wilted lettuce, my prime rib was wretched, and Dani's prime rib was overcooked), and when we complained to the manager, he made multiple excuses and rolled his eyes a lot, and never once apologized. It was a textbook example of bad customer service.

Saturday early afternoon, I was down in Old Bridge for the Garden State Speculative-fiction Writers monthly meeting, where I talked specifically about the art of outlining. That talk went very well, even though the audience was understandably small for a holiday weekend with the temperatures approaching three digits. Thanks to the GSSW folks for inviting me!

Meanwhile, Wrenn was at North American Discworld 2013 down in Baltimore. In addition to being one of the three hotel liaisons, she also participated in the masquerade, her first time doing a costume in several years (certainly her first since she and I met in 2009), going as Lady Sybil. She wound up winning Best in Class Workmanship for Master Class, and Best in Class for Master Class. My girlfriend is awesome.

Here's a pic -- Wrenn is the third person from the right in the green gown: 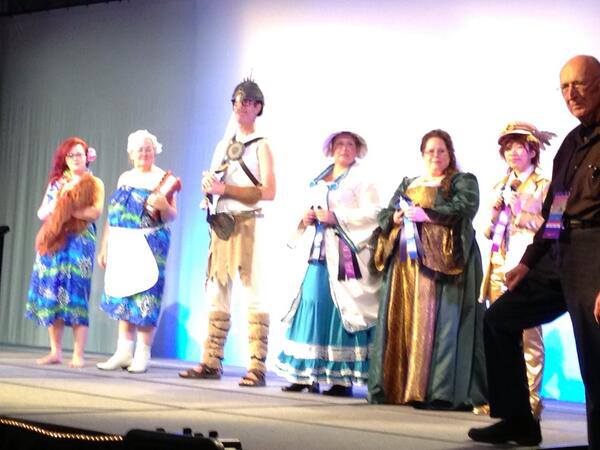 Finally, the Dragon Precinct graphic novel Kickstarter went live yesterday, and we're doing okay so far. As I type this, we're 30 hours in and have got 45 backers and have raised $2687 of the $40K we need. It's a start......

The Trenton Thunder's bat dog, Chase, retired this year. He's a 13-year-old Golden Retriever, and he's been fetching bats for the Yankees AA affiliate for more than a decade. His son, Derby, is taking over, as Chase has blood cancer and probably won't be with us much longer. Wrenn﻿ and I were lucky enough to see Chase in action a couple years ago when we travelled to Trenton to see a Thunder game where Phil Hughes was pitching a rehab start. I'm sorry we never made it back to see Chase again (though we do have a Chase keychain, which holds our spare house keys).

Friday night, the Thunder held a retirement party for Chase, and fans were encouraged to bring their own dogs. Had Wrenn and I not already been committed to Discworld and Dexcon, we would've tossed Scooter into the back seat of the car and driven down to Trenton to pay tribute to a wonderful pooch.

Here's a phenomenal piece on Chase by Howard Megdal for Sports on Earth.

This will, in the short term, aid Kramer in his funding of his defense against the charges of pedophilia, but now that he's been detained again, his legal fees are going to skyrocket, which probably motivated him to take the deal where he wasn't willing to before. Either way, Dragon*Con -- which has been actually free of Kramer's influence, as he'd had nothing to do with the con this millennium -- is now legally and financially free of Kramer as well.

This blog post by my buddy Emily Asher-Perrin at Tor.com explains why. Just go read it. Trust me.
Collapse