If you want to preview the Cassie Zukav stories, I'm making the three-part "Cayo Hueso" story in Ragnarok and Roll: Tales of Cassie Zukav, Weirdness Magnet available electronically! Part 1: "A Farewell to Cats" -- in which Cassie has an emotionally fraught reunion with her parents and also encounters the very cranky ghost of Ernest Hemingway -- is now available for the Kindle for only $.99!

An excerpt from the story:

Sandy was still talking. "The house was originally built back in 1851 by a marine architect and wrecker named Asa Tift. Hemingway made it his home here in Key West in 1931."

"Very good question!" Sandy provided another yellow-toothed smile. "When Hemingway first moved in, there was just a regular chain-link, but he wanted some privacy."

Dad asked, "Where are the cats?"

"Is something wrong?" That was Mom's Jewish Mother Voice. Any second now, she was gonna try to conjure up chicken soup to shove down Sandy's throat.

He raised a hand to his high forehead to wipe away the sweat that had formed there. "No, no, no, no, no, I'm fine. Is there, ah, anything else about Hemingway you wanna know? Like the fountain! Did you know this fountain was built from a urinal that used to be in Sloppy Joe's, the bar where Hemingway used to go drinking?"

My mother made the exact same "ew, ick!" expression I made when I learned that particular fact.

Dad asked, "Are the cats really descendents of the polydactyl—" He grinned and glanced at me. "Sorry, the six-toed cat he had?"

Mom rolled her eyes, as if embarrassed to be with such non-Hemingway-adoring plebians. "My husband and my daughter are more cat people than aficionados of fine literature, I'm afraid."

I glared at her. "Right, Mom, me and my Master's Degree in English Lit don't have any kind of appreciation of good literature, you bet."

Sandy, though, looked like he was gonna throw up right there. He was muttering something to himself.

Suddenly, a voice cried, "Get out! I won't have such vermin in my house!"

Turning around, I saw—er, something. Dark hair, muscular figure, thick mustache, but all indistinct, the same way Captain Bottroff's ghost was.

Dad stumbled backward. "What is that?"

That was a surprise. I thought us Norse gods were the only ones who could see and hear ghosts. "You can see him?"

I hadn't yet told my parents that I was one of the Dísir, as I was still trying and failing to find a way to bring it up naturally in conversation. I still hadn't even figured out how to explain that I had no plans to leave Key West anytime soon.

But that was for later. Sandy stared right at the ghost. "Please, Mr. Hemingway, they're the first paying customers we've had all day!" Based on the pleading tone, I suspected that Sandy had had this conversation before.

The ghost of Hemingway bellowed, "If they are only here for the damned cats, they are not welcome in my house!" Hemingway then started floating toward my father. I moved to stand between them, but he got to Dad before I could, and grabbed his shoulders.

For a second, I gawked. Ghosts were insubstantial. Captain Bottroff had never been able to affect anything physical in his entire afterlife. He just kind of wafted around the grounds of the B&B.

Yet here was the ghost of an overrated writer physically tossing my father toward the entrance.

The station takes on a bunch of Gamma Quadrant refugees who think that Bajor would just be an awesome place to relocate. The Bajorans beg to differ as the DS9 Rewatch requests "Sanctuary."

The Skrreeans are a decent little alien culture, with a nice makeup design of yucky flaky skin (a welcome change from the usual default of putting bumpy foreheads on them and hoping for the best; Michael Westmore cites this as one of his favorite alien makeup designs), and the matriarchal society is handled much better here than in TNG’s execrable “Angel One.” The friendship between Haneek and Kira develops very nicely. In particular, one bit is superb: before the translator has kicked in, Haneek points out a dress on the Promenade. Later, Kira gives the dress to her as a gift—but it turns out that what Haneek was saying was how very hideous the dress was. Deborah May expertly plays Haneek as an ordinary person thrust into an extraordinary role.

For the last couple of weeks we've been going back and forth with our vet regarding Rhiannon, our 11-year-old black cat. She stopped eating and was losing weight, and so we took her in for what we at first thought was a tongue ulcer. But the treatment for that didn't actually improve things very much, and so the vet sedated her to do a more thorough exam, including x-rays, a biopsy, a culture, and just a visual exam that he could do more easily with her unconscious (you try poking around a cat's mouth while said cat is awake -- then count your fingers...).

The vet told us Thursday that the visual exam looked to his practiced eye to be oral squamous cell carcinoma, a fast-acting mouth cancer that isn't really operable (though there is a very expensive procedure that would only give her six months to a year, and with half a tongue). But there was also the possibility that it was a bad allergic reaction to something that swelled her tongue, and we had to wait until today for the biopsy results to be sure.

Today, those biopsy results came in, and it was exactly what the vet thought it was in his look-see. *sigh*

Rhiannon has been on appetite stimulants since Saturday, and the current batch will last until Friday. Those stimulants are joining the daily painkillers in an uphill battle to allow Rhi to eat, but she's not eating enough to sustain herself. However, since she started getting those stimulants, she's been more like herself, which is good. We're going to talk to the vet tomorrow, but the plan is to put her down on Friday when the stimulant wears off.

This is going to be a bit rough for me. I've never had to put a pet down. The only pets of mine that have died, did so on their own at home (Mittens in 2004, Newk last year, and Marcus this year), so this is going to be an odd experience....

Rhi has spent a lot of time under the dining room table lately, and I couldn't resist taking a couple of pictures of her down there. In one of them she is LASER KITTEH! thanks to the flash, and that made Wrenn laugh for a minute, so that was good. In the other one, she looks very much like the uncomfortable cat the cancer has sadly made her. 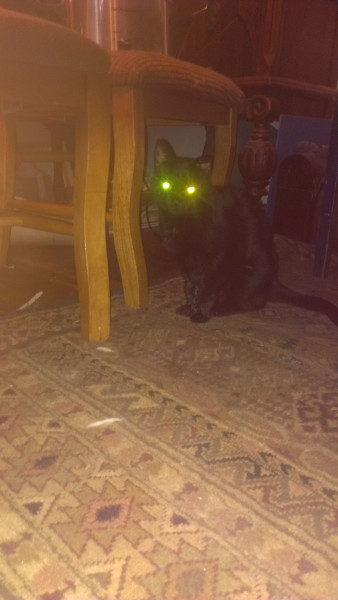 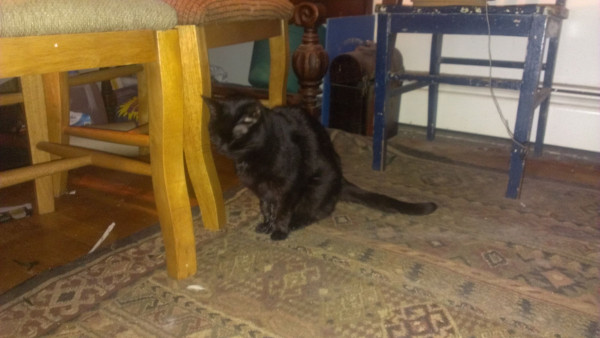