We're putting Rhiannon to sleep today. This is really the only song possible....

Hey, look, it's Prince Humperdinck! And Martha Kent! And Fay Furillo! And O'Brien with his shirt off! And other things we're not entirely sure we wanted to see, as the DS9 Rewatch does "Rivals."

Episodes like this, where everything that happens revolves around a guest star, are dependent primarily on the quality of that particular guest actor. Sadly, and with all due respect to Prince Humperdinck, Chris Sarandon utterly fails in the role of Mazur. He’s flat, dull, uninteresting, has none of the needed spark with Armin Shimerman that the role calls for, nor do we see any evidence of the charm he’s supposed to be using on both Alsia and Roana (tellingly, his seduction of Roana happens off-camera). It’s all surface with no depth. You can’t help but wish for someone like Robert Vaughn (see his role as Albert Stroller on the British series Hustle) or Adrian Lester (also from Hustle) or Gina Bellman (from the American series Leverage) or, hell, K Callan right here in this episode, who does a better job as a con artist than the guy sitting across the table from her.

Episode 33 of Dead Kitchen Radio: The Keith R.A. DeCandido Podcast -- the first of two August podcasts celebrating the release of Ragnarok and Roll: Tales of Cassie Zukav, Weirdness Magnet. In this episode, I read "Love Over and Over" from the collection.

DKR is available through iTunes or the Rift web site. You can comment here on the blog, or via e-mail to keith at decandido dot net, on DKR's Facebook page, or by phone at 888-866-9010.

She is like a cat in the dark
And then she is the darkness
---Stevie Nicks, "Rhiannon"
When

wrenn was married to her now-deceased ex-husband Jeff, he worked in a metal shop as a welder. There were a bunch of shop cats who came wandering in and out, and one all-black kitten took a shine to Jeff. He wound up taking her home, and he and Wrenn named her Rhiannon, after the lines in the Fleetwood Mac song quoted above.

When Wrenn and Jeff split up, she wound up with Rhi, as Jeff's new woman didn't like her. She came as part of the menagerie when Wrenn and Dale moved up here, along with Scooter, Newk, Belle, and Dale's cat Sterling.

Rhi was always the guest cat. She never crawled into bed with us for more than a few seconds or so -- basically long enough to get scritched, then she'd bugger off -- but any time someone stayed over, she'd crawl into the bed with them to snuggle them. (We joked that she never slept with the help.) She was a very willful cat, had to do everything her own way. She hated being picked up, and she also totally owned Scooter despite being a tenth his size. (We didn't call her "the Principessa" for nothin'....)

She was always a very small cat -- she just stopped growing after a certain point -- and she had a crooked ear thanks to a hematoma, so she was very distinctive looking. 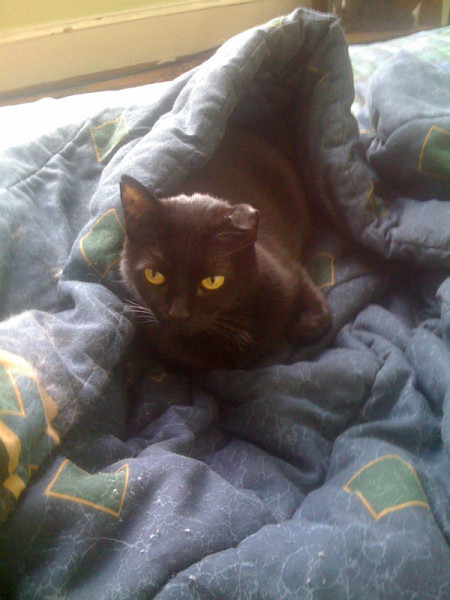 Rhi has always had asthma -- the result of breathing in way too many metal shavings as a kitten in Jeffs shop -- and she also was more susceptible to allergies than usual. A couple of weeks ago, she started showing some bad signs -- not eating as much, losing weight. At first we thought it might be a tongue ulcer, but it only got worse as time went on, and -- several tests and examinations later -- we learned it was oral squamous cell carcinoma on her tongue, which is fast-acting and night-impossible to treat successfully.

We kept her on pain meds and appetite stimulants for a couple of days and still had to force feed her. All this was smoke and mirrors to give her a last few days of comfort and relative normalcy. But today it was time, and our vet did the deed, and we buried her in the back yard of my parents' house right next to where we buried Newcastle when he died at the end of last year. Then tonight we went out for our usual Friday dinner in Little Italy with my parents, where the food was particularly excellent, and Wrenn in particular had a lot of wine.