HAVING A WONDERFUL TIME IN KEY WEST, WISH YOU WERE HERE!

Seriously, we're having a great time. After my last blog entry discussing the trip, I said we were gonna take a quick rest and then go to the pier for sunset. That didn't quite work, as we wound up sleeping until 9.30pm. We had dinner at Pincher's Crab Shack (the very loose basis of Em's in the Cassie Zukav stories), and then went to the Hog's Breath Saloon, which -- along with Captain Tony's Saloon and the Schooner Wharf Bar -- is one of my favorite places to hang out on the island. We saw a very talented woman named Stacy Brooks perform with her superb band. Stacy and I spoke after her set was done, and it turns out that a) she's a big ol' geek and b) is a cousin of Avery Brooks, a.k.a. Sisko from Deep Space Nine, which is seventeen kinds of awesome.

Monday it rained, so we spent the morning just hanging out in the B&B, Wrenn doing some reading, me doing today's DS9 Rewatch of "Whispers" (which will be up on Tor.com today), then we went out to do more touristy stuff: the Customs House (which has a ton of Key West history) and the Little White House (which reminds me why I've always liked Harry Truman as a president). Then we went to my favorite restaurant going back to Marina's and my first visit to the island, and also my parents' favorite place the one time we took them here in 1994, Bagatelle (where we had the world's most charming waiter, and then ate some lobster macaroni and cheese that was superb).

After that, we took a ghost tour on a trolley. Cheesy, yes, but Key West is full of ghost stories, and I am writing urban fantasy stories set on the island. Ghost lore is an important part of this place, and has already played into the Cassie Zukav stories (see, in particular, the "Cayo Hueso" three-parter). But what was truly fantastic about the tour was the history behind the ghost stories -- not that the ghost stories weren't cool.

And we got to meet Robert the Doll in the Fort East Martello Museum -- but he used to live in one of the houses across the street from where we're staying on Eaton Street. Anyone who's read my Doctor Who short story "Raymond's Room" in the 2001 charity anthology Missing Pieces or my Supernatural novel Bone Key will recognize the doll as the basis for the title character in the former and the spirit-infused child's doll in the latter.

I forgot to post my Saturday progress where I worked in LaGuardia and the plane, getting about 1200 words written, and then today I carved out some time to sit on our lovely verandah to get another 1100 words written. Chapter 16 is now done, and Gryphon Precinct is at 44,259 words. There are only two chapters to go, plus the epilogue......

Here's the verandah where I was working: 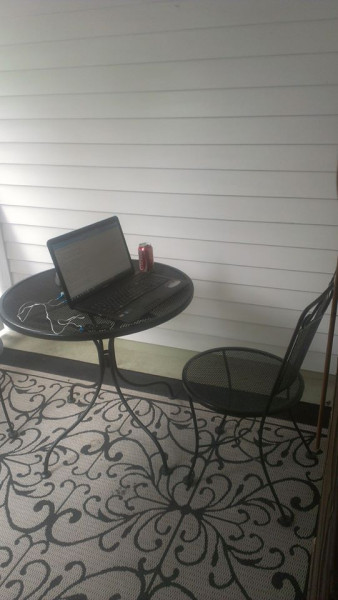 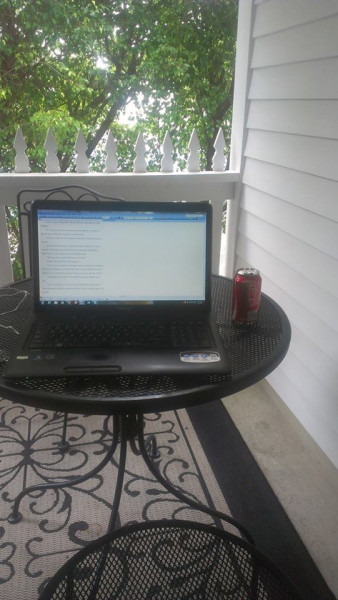 Nice, huh? The room is called the "treetop room" for a reason. :)

O'Brien thinks there's a strange conspiracy to shut him out of what's going on at the station. He's both right and wrong, as the DS9 Rewatch hears some "Whispers."

Rewatching this one is less rewarding—unlike, say, The Usual Suspects where you can find all the hints that you missed the first time through—because the what’s-going-on tension is lessened when you know it’s not really O’Brien, and you don’t have the same Manchurian Candidate vibe when the sabotage trigger kicks in (like we got in the Manchurian-esque “The Mind’s Eye” on TNG, which also had a strong role for O’Brien) to see if he’ll carry out his orders, because we never get that far. In fact, we never even find out what Fake O’Brien’s orders are.