The Schooner Wharf -- located on the water at the north end of William Street -- encourages people to bring their dogs to the bar. McCloud is one of them: he brings his dog Cinderella to the bar every day that he performs.... 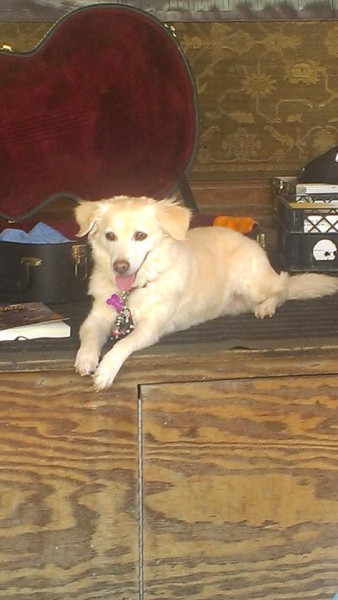 This recording of "Schooner Wharf Bar Dog" is from a 2010 performance. In the three years since, McCloud has grown his hair back and is sporting a nifty white beard. Enjoy!

We have departed Key West wanting very much to go back, y'know, now, but knowing that being a grown-up doesn't allow for that. So we spent the morning doing some laundry, spent the early afternoon in the Schooner Wharf Bar seeing Michael McCloud one last time and eating some amazing seafood (I ate the best oysters I have ever had in my life, and I've had some damn fine oysters in my day, but the catch today was superb), then we went to Route 1 and continued north until we reached Miami. We did make a couple of stops along the way, including once to take pictures of the Seven Mile Bridge and once to eat dinner at the Fish House in Key Largo, and now we're ensconced in the Red Roof Inn near Miami International Airport. Along the way, Wrenn got to see how incredibly beautiful the drive through the Keys is on the Overseas Highway. It's the same route that the railroad that was opened in 1912 took -- until a hurricane destroyed it in 1935, and the railroad company, bankrupt from the Depression, sold the right-of-way to the state of Florida, who built a big-ass road in its place, extending U.S. Route 1 all the way to Whitehead Street and Fleming Street on Key West.

Key West hasn't changed in any way that matters in the 20 years since I first visited here (May 1993, when Marina and I came here to celebrate our first wedding anniversary). Structurally, there are some differences, mostly due to hurricane damage in recent times, and there are some other minor changes (Irish Kevin's didn't exist when I was there last in 1999, e.g., and the whole "Mile 0" meme didn't exist then), but overall, it's the same laid-back, touristy, fun-loving, easygoing place I first went to two decades ago. We met some wonderful people, from the guy at the Schooner Wharf on Sunday to Chip and Bobbi last night to our fellow Old Town Manor guests, and are just delightfully relaxed and happy.

Tonight we sleep the sleep of the just, and then tomorrow morning we return our rental car and then head to Dragon Con 2013. My full schedule can be found here. Hope to see folks there!!!!!
Collapse