So this morning, I got Megan off to the airport at the ridiculous hour of 4am so she could take her 6am flight to California to visit with her Mom for the rest of the month. She had a wonderful time on her New York Adventure, as she put it.

She didn't arrive until Tuesday afternoon, so we picked her up at JFK and then had a nice sushi dinner. The theme of the week was good food, as poor Megan lives in Bilund, Denmark, the location of LEGO Headquarters and not a lot else. Since Megan does some work for LEGO, though she's not on staff, and writes the LEGO Adventure Books, it's a smart place for her to live, but still, she misses good food. 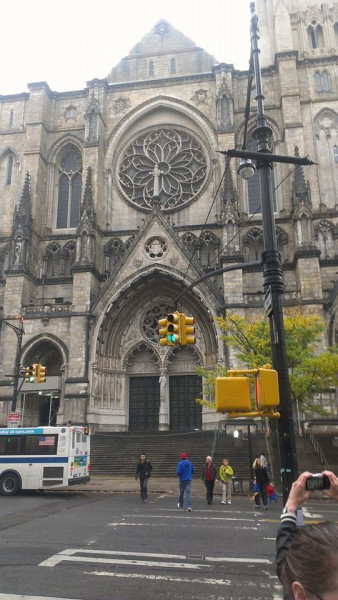 So we gave her lots. Tuesday night was sushi at our excellent local Japanese restaurant. She spent Wednesday afternoon and evening and Thursday morning with another local friend she hadn't seen in a while, then she hooked back up with us Thursday afternoon at Ellen's Stardust Diner in midtown, a cool NYC experience. Then we hied up to the Upper West Side. Megan did a signing at the Bank Street Bookstore, a kids bookstore near Columbia University, and before that, we had time to wander about the Cathedral of St. John the Divine, which is glorious and lovely and wonderful.

After doing that and the children's sculpture garden, we went over to Bank Street so Megan could do her thing. She had a captive audience of several children who were all enthusiastic LEGO builders, and she showed off her LEGOs, read from the first Adventure Book, and did a demo where a bunch of us got to build a little bat named Batty. (I participated in that last bit, my first-ever LEGO build. I didn't have LEGOs growing up, as my grandfather worked for FAO Schwarz and all my toys came from there. When I was a wee tot in the 1970s, Schwarz didn't carry LEGOs. Instead, I had Stickle Stackers....) 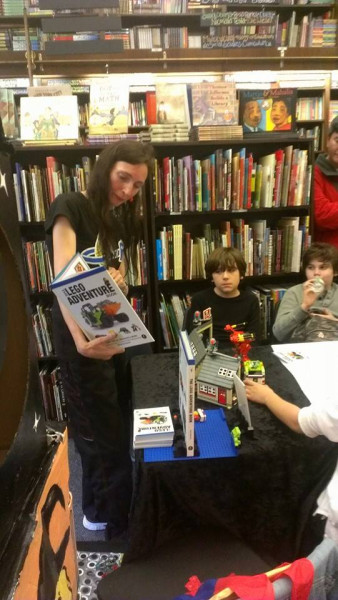 We celebrated a successful signing and generally fun day with pizza at V&T's, one of the best pizzerias in NYC. Located across the street from the cathedral, we had a pizza that was half bacon, half sausage, and all yummy! Plus we killed a bottle of red wine....

Friday was spent at the American Museum of Natural History/the Rose Center for Space, where we got to show Megan the space show "Journey to the Stars," and also do the usual pilgrimage to the blue whale. Before that, though, we went to Alice's Tea Cup for tea and scones. Friday night, she joined me, Wrenn, and my parents for dinner at our usual Friday-night haunt, Mario's in the Bronx's Little Italy section, and Saturday morning she went back to Little Italy with Wrenn for the weekly shopping (I was home recording an episode of The Chronic Rift podcast). Lunch was cold cuts, fresh bread, and mozzarella cheese from there. 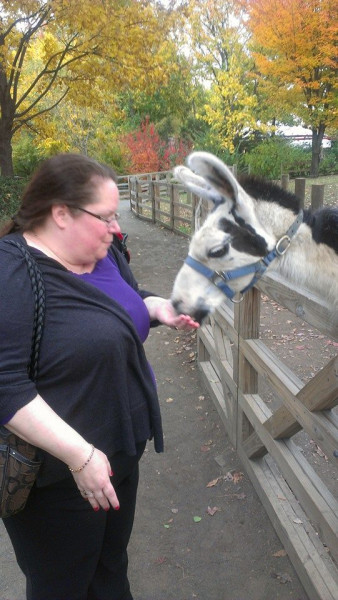 And finally we went off to Queens on Saturday. I had a signing with some fellow Star Trek scribes Saturday night at the Enigma Bookstore, so we decided to spend the (lovely) afternoon in Flushing Meadows-Corona Park. The site of two different World's Fairs, the park also has a lovely carousel, the Queens Zoo, the Queens Theatre, the New York Hall of Science, the Queens Museum of Art, CitiField, the National Tennis Center, etc. We did the carousel, the zoo, and the World's Fair stuff.

The signing at the Enigma Bookstore went really well, despite losing one of the participants. Aaron Rosenberg was feeling very sick and didn't think that showing up at an enclosed space with lots of people was such a hot idea. He was semi-adequately replaced by Glenn Hauman, who joined me and David Mack for a lovely evening of readings, Q&A, signings, eating, drinking, and conversation.

Glenn read Chapter 2 of his collaborative Trek endeavor, the S.C.E. story Creative Couplings, which he wrote with Aaron. Dave followed that lighthearted scene with the very depressing prologue to the book he was premiering at the signing, The Fall: A Ceremony of Losses. And I finished it off with a reading from the First Precept from the upcoming The Klingon Art of War.

After that we answered a mess of questions, and then ate and drank from the lovely spread the owners of Enigma -- the mighty Claire and Hugh -- provided. Much conversation was had, many books were sold and signed, and a good time was had by all. Oh, and folks got to look at the exclusive preview of The Klingon Art of War, including the cover, the front matter, the introduction, and the First Precept (complete with spiffy artwork). 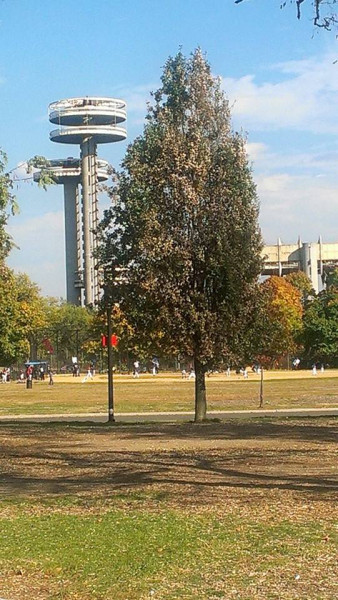 Then we stayed up for a while to watch Men in Black, the climax of which takes place in Flushing Meadows-Corona Park ("Hey! Old guys! Do those still work?"), and then slept for a couple hours before I had to take Megan to JFK for the next leg of her trip.

And a good time was had by all. Today we have a bunch of errands to run, and I need to start my movie novelization. The latter is a default NaNoWriMo, since it's due 1 December. Cha cha cha.

To close, here's a wonderful picture Wrenn took of me at the children's sculpture garden next to the Cathedral: 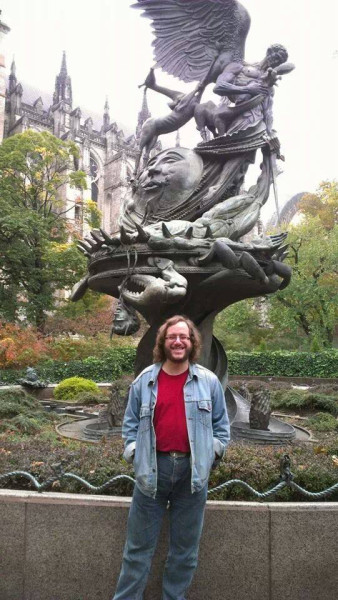 This post with my Philcon schedule has been amended to include a reading, which will be Saturday night at 8pm.
Collapse