Odo figures out who sabotaged the replicator and the wall junction and feels the need to explain to Sisko his entire process for acquiring the information. When Sisko asks why Odo didn’t just cut to the chase, Odo says, “Well, sometimes I have to remind you just how good I am.” At another point, he provides Sisko with a list of people he's going to investigate, with Quark on the list. Sisko is surprised at this, as this doesn't seem like something Quark would be involved in, at which point Odo says, in as close to a “duh!” tone as Rene Auberjonois is ever likely to use, that he always investigates Quark...

Hot off the presses is the fourth novel (and fifth book) in the acclaimed "Precinct" series of high fantasy police procedurals! Gryphon Precinct is now available in trade paperback from Amazon, Barnes & Noble, and directly from publisher Dark Quest Books. (The Kindle and Nook editions will be coming soon....) 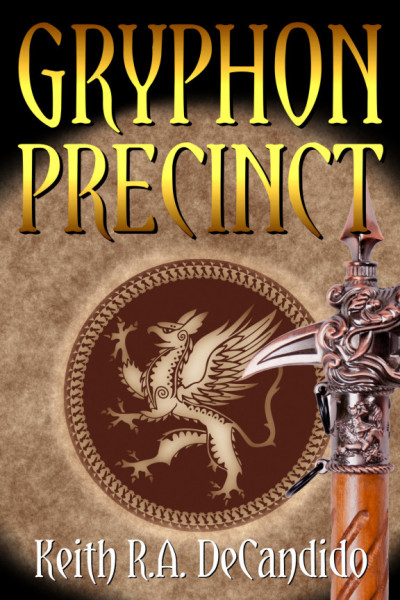 From the back cover:

"A fascinating excursion in genre-bending; worth a try even for readers who usually take either their procedurals or their fantasies unadulterated."
—Booklist

"Dungeons and Dragnet... As a take-off of the standard crime drama, Dragon Precinct succeeds nicely. Dressed in sword-and-sorcery trappings, the clichés of the genre are given a fresh twist."
—The Journal of the Lincoln Heights Literary Society Authors and Editors

Humans and elves, dwarves and gnomes, wizards and warriors all live and do business in the thriving, overcrowded port city of Cliff's End, to say nothing of the tourists and travelers who arrive by land and sea, passing through the metropolis on matters of business or pleasure—or on quests. The hard-working, under-appreciated officers of the Cliff's End Castle Guard work day and night to maintain law and order as best they can.

Cliff's End is rocked by the death of Lord Albin. As soon as the funeral ends, Albin's son Blayk takes over and starts instituting wholesale changes in how the Cliff's End Castle Guard is run: enforced retirements of older guards (including Captain Osric), surprise promotions (including Grovis to replace Osric as Captain of the Guard), sword requalifications for all guards, and much more.

Worse, Blayk has split up Lieutenants Torin ban Wyvald and Danthres Tresyllione and given them new partners. Lieutenant Dru, still devastated by the loss of Lieutenant Hawk, also has a new partner. All three detectives catch separate cases, but the more they investigate, the more they realize that all three are related—and connected to a conspiracy that targets the King and Queen themselves!

An all-new adventure of the Cliff's End Castle Guard!

"Unicorn Precinct is a fantastical, funny twist on the traditional murder mystery, with many likable characters and enough twists and turns to keep things interesting."
—Sci-Fi Bulletin