Another fun picture of my silly stuff, the top of "Mrs. Murphy's Chowder," the bureau that I've had since I was a wee tot (and which dates back to at least the 1940s). At this point, I only have use of the bottom two drawers as certain redheads I'm engaged to have bogarted the top three drawers because they were too lazy to haul their own dressers up from Delaware when they moved. *tee hee*

wrenn's chops. Besides, her need for the drawer space forced me to finally weed my t-shirt collection....) 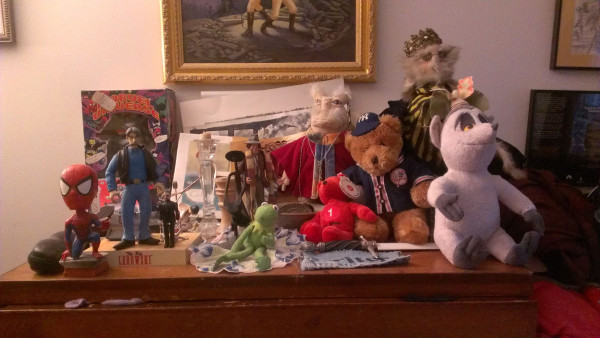 Ian Coomber of WhatCulture.com has compiled a list of the five best Star Trek novelists, and I'm #3 -- behind David Mack at #2 and Una McCormack at #1. Christopher L. Bennett is at #4 and Armin Shimerman, Andrew J. Robinson, and J.G. Hertzler are tied for #5.

I am, to say the least, thrilled.

There’s more to Stark Trek tie-in fiction than just writing novels, and Keith R.A. DeCandido (KRAD to his friends) has pretty much done it all. Not only has he written novels for all five TV series, he has also written comics, edited short story collections, and even created not one, but two, brand new literary Star Trek series.