After spending the better part of a week beating the apartment into shape for our annual Twelfth Night party -- much of which was spent working on the library, which needed to be overhauled, and the bedroom, which was a particular disaster -- we had that party on Saturday night. Sixteen of our dearest friends came into our home and ate and drank and were merry with us. You know it's a good party when you look up and are surprised to realize that it's as late as 10.36 -- and even more shocked when you look again and it's already 11.14.

The food included fresh pasta from Little Italy in the Bronx, along with Wrenn's meatballs and my tomato sauce (defrosted from the batch I made in October); a beef stew that included basically pulled beef made by Dale in the crockpot with spices and stuff, along with roasted veggies made by Tina; various cheeses and cold cuts from our excellent local market and from Little Italy, including fresh mozzarella and tomatoes; Wrenn's homemade chocolate chip cookies; berries along with Wrenn's homemade whipped cream (made during the party in Dale's old kitchenade); some other cookies and a chocolate cake that some guests brought; and wine and other booze both from our own stash and that folks brought along (we killed six bottles of wine).

Everyone left around midnight or so, except for Tina and Neal, who stayed the night. By the time we all settled down to sleep, it was 2am -- and I had to be up at 8am to go to Kagami Biraki, our annual new year's workout. The phrase is Japanese for "opening the mirror," and it's traditional at a dojo to have a big-ass workout at the beginning of the year to set the tone for the new year.

Based on this morning, this year will be very sweaty. *wry grin* We worked out for a solid 90 minutes, ending with 100 knee kicks and 50 pushups. It was actually pretty awesome.

Of course, I was exhausted and dehydrated (a fellow black belt and I were comparing stories of lack of sleep; he was also up until 2am with "vodka and tequila," and I laughed and said, "Mine was wine and Scotch"). I went back home and then the four of us went to a local diner for a lovely brunch (bacon! coffee!). Then Neal and Tina headed home and I collapsed on the red beanbag for a two hour nap.

And then I had to pick up two of the four parents along with my aunt from their brief trip to Iceland to see the Northern Lights. This involved going to my parents' place and getting their Rav4 (our car isn't big enough for them and all their luggage), then going to JFK and then dropping off them and their car and then taking my aunt home to Fort Lee in our car. Wheeeee!

Tonight was vegging in front of the TV, and now I'm going to bed. Tomorrow, it's back into the writing grind, as I haven't touched the mystery in ages.....

The good folks at Sequart are putting out an essay collection that is all about Star Trek in comic book form. I contributed a piece to it, about WildStorm's two-year run of comics from 1999-2001 (some of which have continued to influence Trek tie-ins to this day).

Here's the book's cover, which I adore: 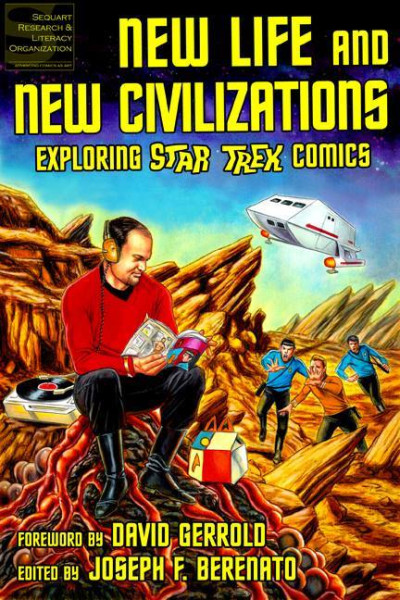 The book also has a Facebook page, which you should like to keep up with info on it....

Sequart has a page up for New Life and New Civilizations, including the full list of contributors. They are:

I'm pleased to see fellow Trek novelists Dilmore, Greenberger, McIntee, and Ward on the list, along with fellow Trek comics scribe Tipton, as well as Porter, the author of Star Trek: A Comics History.

Oh, and the spiffy-keeno cover (which you can see right here) is by Patricio Carbajal.
Collapse