After missing it last year, Wrenn and I returned to Philcon, and we had a great time. Philcon has nowhere near the attendance it used to, but it seems to have finally settled into being one (small) step up from a relaxacon. Attendance remains pretty firmly in three figures, but everyone has come to accept and work with that, I think. Indeed, my informal poll of the dealers was that no one was really disappointed with how they did -- there weren't a lot of people there, but they did spend money.

From my own perspective, neither of the panels I was on were hugely well attended, but I got half a dozen people at my reading, which is pretty good given that I've done readings with fewer people at conventions that were way larger.

Anyhow, the con was tremendous fun at least in part because of the people. We roomed with Meredith Peruzzi and her wife, which went swimmingly (good to know, as the four of us are taking a trip to Key West next spring, and this was a good field test for our ability to room together -- we passed with flying colors, as I figured we would).

Friday night, I had my autographing -- which was good, I sold a few books -- and the Meet the Pros party, which mostly consisted of sitting at a table gabbing with people while drinking. That would be a theme. The evening ended with The Eye of Argon reading, in which Michael Ventrella, Gail Z. Martin, Peter Prellwitz, and several others tried to read the worst piece of fiction ever with a straight face. And once you failed in your reading, you had to act it out.......

The Eye of Argon!!!!!!!! Photos by Heidi Hooper or Meredith Peruzzi: 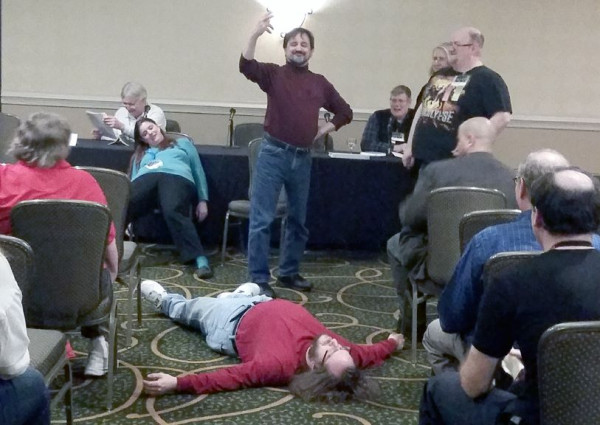 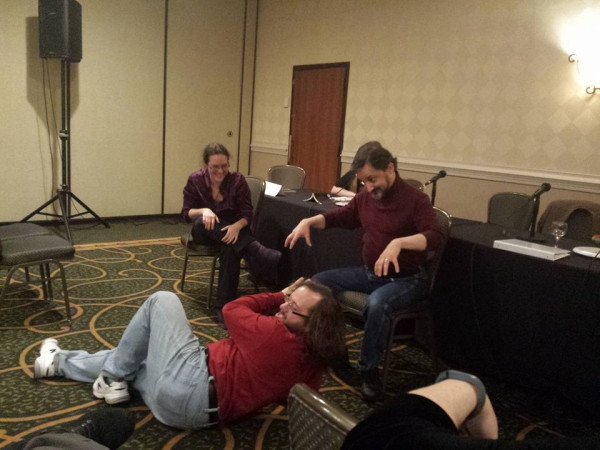 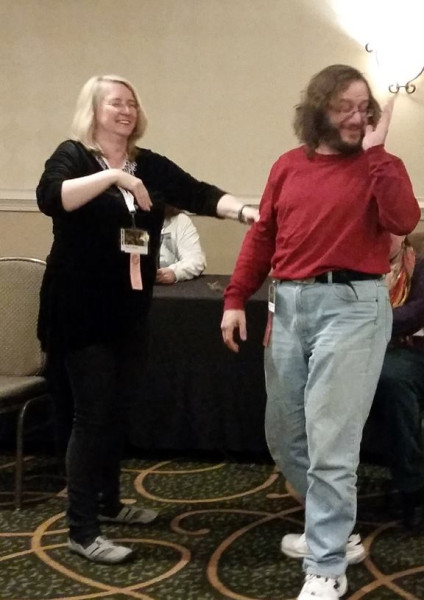 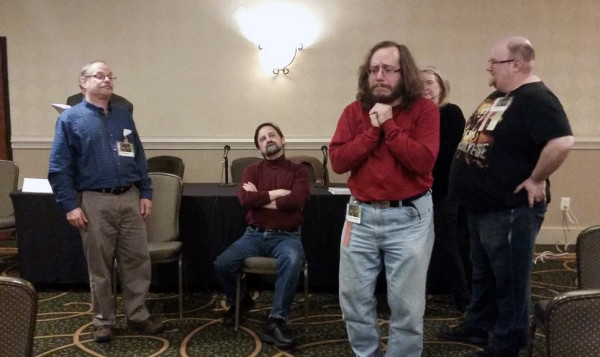 Saturday was a light day for me until 4pm, so I spent some of it working on Book 2 of the trilogy, and some of it at the eSpec/Dark Quest table pimping books -- most notably The Side of Good/The Side of Evil, which was launched by eSpec this past weekend. Several contributors to the anthology were at the con: editors Danielle Ackley-McPhail and Greg Schauer, artist Jason Whitley, and authors Drew Bittner, James Chambers, Gail Z. Martin, Aaron Rosenberg, and me. As an added bonus, there was a launch party for the book Saturday night and in addition to all of the above, Bryan J.L. Glass came down for the party as well! It was very well attended -- indeed, some people I know had to leave because the room was getting too crowded -- and lots of copies of the anthology were sold. A good time was had by all. 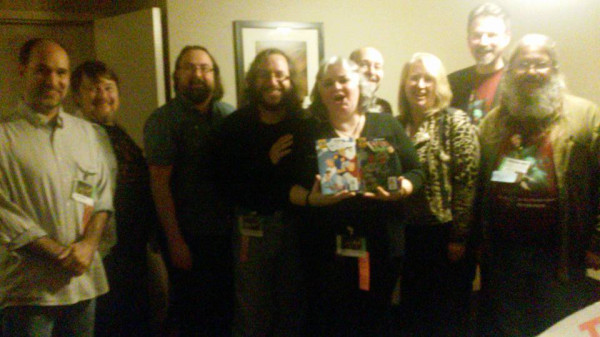 Other stuff on Saturday included a very lively discussion on writing in shared worlds -- which included media tie-ins -- though the panel was a bit too dominated by me and Aaron, as is our wont, but nobody complained. My favorite was the one audience member who was stunned that I seemed to write in all her favorite licenses....

My reading was at 6.30, and I got to read one chapter each from the just-released Heroes Reborn novella Save the Cheerleader, Destroy the World and the soon-to-be-released Stargate SG-1 novel Kali's Wrath.

After the launch party, we retired to the bar, which was the high point of the convention. It started out with me, Wrenn, Meredith, and Meredith's wife, and we were soon joined by Eric Gasior, Joe Berenato, Helena Frank, Zan Rosin, Greg Schauer, Liz Sullivan, Meri Ness, Ian Randal Strock, and others. We sat up talking and laughing and drinking and having a wonderful time. 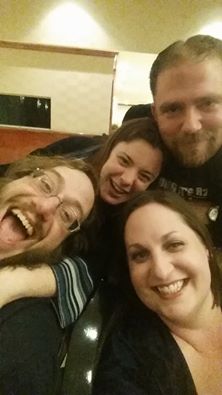 Then there's me and Helena, also taken by Helena. 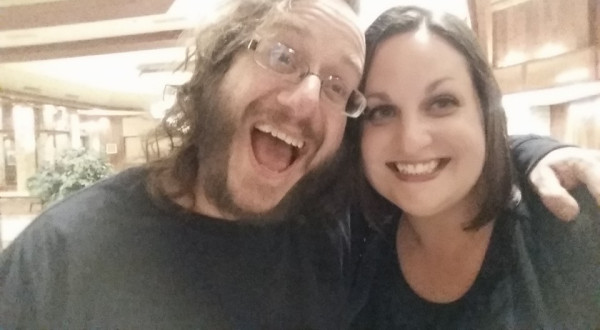 Finally, I took a Liars Club selfie of me, Gregory Frost, and Jon McGoran. 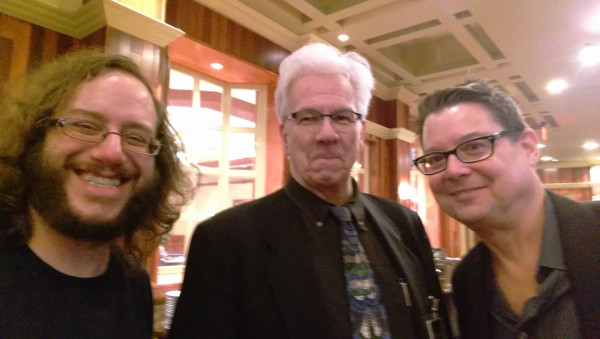 Sunday was a light day -- just a Tanith Lee memorial panel with Ian, Darrell Schweitzer, and Diane Weinstein, which was a lovely tribute. (I actually worked with Tanith on a couple of short stories and her "Unicorn" YA trilogy when I worked for Byron Preiss in the 1990s.) But I spent more time hanging out with folks and being in the dealer room doing commerce and so on.

It was great to see so many folks. Besides those listed above, there was Mary, Dennis & Kat, Bill, Savan, Orenthal, Neal, Ira, Susan, Vikki, Chris, Stephanie, Wendy & Chris, Glenn, Ian H., Meg & Ross, the amazing Lynati, fellow Liars Club members Gregory Frost and Jon McGoran, and best of all, the mighty Hugh Casey, who was freed from the hospital in the midst of his cancer battle to hang out with folks. (Apologies to those I left off this list because I'm forgetful and I saw a lot of people.) 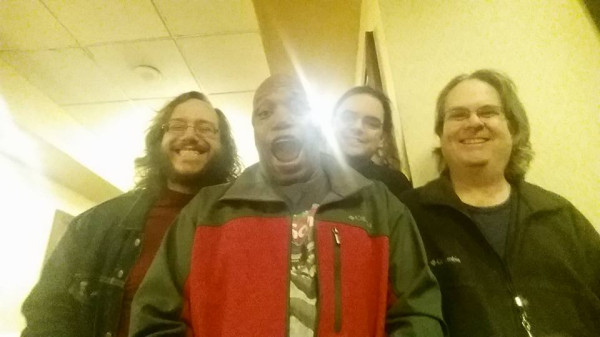 After the con ended, Wrenn and I went to visit her father for a bit, then headed home to watch a devastating Doctor Who and a couple of other things off the DVR.

This week: WRITING! Plus, y'know, there's a holiday on Thursday......
Collapse