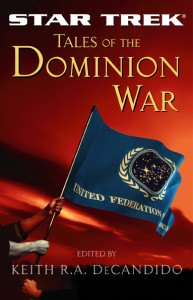 I'm pleased to see that the Star Trek anthology I edited in 2004, Tales of the Dominion War, is one of eBookDaily's bargain books for today. Now's a great chance to pick up this anthology about what the rest of the Trek universe was doing during the Dominion War that dominated the last two years of Deep Space Nine for only two bucks!