Rhiannon Giddens recently appeared on Austin City Limits, and just killed it with this version of "Louisiana Man," which she describes as an angry love song. Just a superb performance. 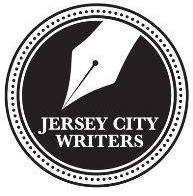 On Tuesday the 11th of October, I'll be speaking before the Jersey City Writers to discuss superheroes and stuff. The event will be held at the Art House on Magnolia Street in Jersey City, right behind the Journal Square PATH station. Details here.

I'll be talking superheroes and also reading from Marvel's Sif: Even Dragons Have Their Endings and/or one of my upcoming Super City Cops novellas. I'll also have some books for sale (whatever's left after NYCC, anyhow).

Hope to see folks there!

Did something a little different this year at New York Comic-Con: instead of getting a table with one or two other people, whether the podcast table that we did for The Chronic Rift up until 2013 (after which NYCC discontinued doing podcast tables due to lack of space) or the small-press table I shared with Megan H. Rothrock, she of The LEGO Adventure Book series, in 2014 and 2015, this year I went back to what I did with BOOM! Studios in 2009 and 2010: I was a staple at the WordFire Press/Baen Books booth, joined by a ton of other authors. WordFire will be publishing my NYC-based urban fantasy series starring Bram Gold, starting with A Furnace Sealed next year, and this should be the beginning of several appearances at their pavilion at various cons. I got to share a big-ass booth with Quincy J. Allen, Kevin J. Anderson, D.J. Butler, Colt the Outlander, Larry Correia, Bill Fawcett, Eric Flint, Charles E. Gannon, Mike Kupari, Jonathan Maberry, David Mack, John Jackson Miller, Jim Minz, Rebecca Moesta, Jody Lynn Nye, R.A. Salvatore, Ryk Spoor, and Ramón Terrell, all ably assisted by Michelle Corsillo, Alexi Vandenberg, and my lovely fiancée Wrenn Simms.

I also did a couple of other signings, one of my new Marvel stuff at Joe Books's booth, one of X-Files and V-Wars stuff alongside Jonathan Maberry and Glenn Greenberg at IDW's booth. I also got to meet Tom Tomorrow (a rare case of me fangoobering because, HOLY FUCK, IT'S TOM TOMORROW!!!!!), finally meet IDW's Sarah Gaydos, not to mention all the folks I work with at Joe Books, touch base with Stuart Moore and meet Alisa Kwitney, and see TONS OF PEOPLE, HOLY CRAP THEY WERE ALL THERE.

Anyhow, I'm pooped, but it was a great show. I sold out of everything I had in my tiny corner of WordFire this weekend, including the show-exclusive Marvel's Sif: Even Dragons Have Their Endings, which isn't officially released until next month. Yay! Jane Foster Thor again, this time with my books! Hooray! (Note the bigger smile because she now has fabulous reading matter......) 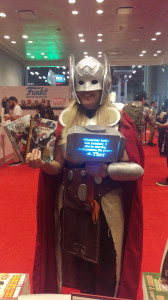 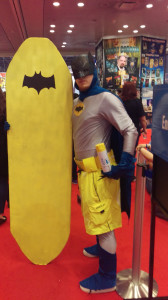 Darkwing Duck! The terror that flaps in the night is posing with my old buddy Maryelizabeth Yturralde of Mysterious Galaxy, the finest bookstore in all the land. Holtzmann and Katara. Now I want to see the Ghostbusters/Avatar crossover..... 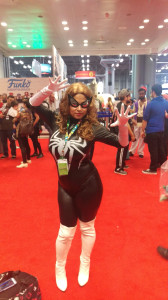 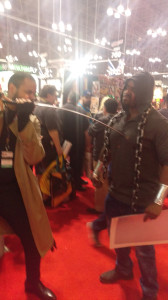 The Worm, Sarah, and the Goblin King from Labyrinth. Saw plenty of Goblin Kings over the weekend, but this is the only Sarah I saw. Brava for making the 80s vest! Sadness from Inside Out. Me with a copy of the Sif novel. The massive gentleman to my right is Jonathan Maberry. 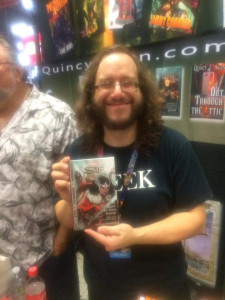 Me on the final day with all the books I had left. I started out with way more. They were gone by day's end. 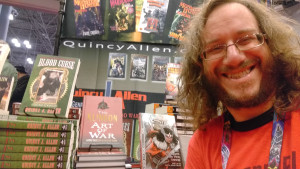 Afterward, Wrenn and I did our traditional post-NYCC dinner at Lombardi's.