I done went and voteded! 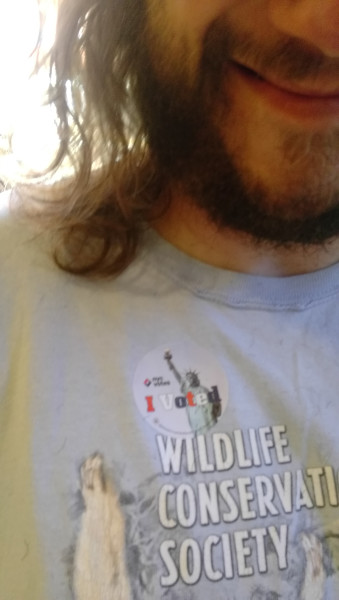 Wrenn, Dale, and I all got up early (for us) and went to our new polling place -- the local elementary school -- in order to vote. There was a line, but it moved pretty briskly. You will be completely unsurprised to learn that I voted for Hillary Rodham Clinton for president. I think she's one of the best candidates we've had in my lifetime, I think she will do a superb job as president, and I am eminently proud of the fact that I voted for her today.

And even if none of those things were true, I would have voted for her, because the alternative is the single worst major candidate for president in our 240-year history. Donald Trump is a bigot who has evinced no understanding of how government actually works, and what few policies he's specified are all appalling, impractical, and/or stupid.

After that, we hied to our local. After this election season, voting needed to be followed by drinking, and yes, it was before noon, what's your point? After a hearty meal and a heartier drink, Wrenn and I went over to Woodlawn Cemetery. Four of the women who fought for suffrage in the early part of the 20th century are interred there: Elizabeth Cady Stanton, Mary Garrett Hay, Carrie Chapman Catt, and Alva Vanderbilt Belmont. We visited each of their graves and put a white flower on each marker. 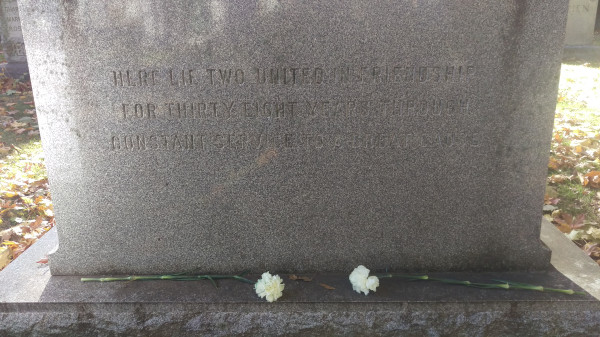 Two flowers on the larger marker for Mary Garrett May and Carrie Chapman Catt, plus shots of the women's individual grave markers. Because they are smart, the caretakers of the cemetery put posterboards up near all three grave sites. In the past, people would put their "I voted!" stickers on the markers themselves. This year, rather than force the grave tenders to scrap stickers off the graves -- which can't be any fun -- they put out these: I'm going to repeat that: women have only been allowed to vote for less than a century, which is appalling. Even more appalling than the fact that it's taken us just shy of two-and-a-half centuries to finally even make it possible for a women to win the office.

I hope everyone reading this who is a citizen of the United States has voted or plans to vote before the polls close tonight. It's the best way to make our country work, and it's an important right. Especially this year.

The live-action series ends, not with a bang, but with a very sexist whimper. The TOS Rewatch suffers through "Turnabout Intruder."

There are some really good character moments here, too. I love watching how each member of the crew comes to the realization that Kirk isn’t Kirk. With Spock, he’s completely skeptical right up until he reads “Lester’s” mind and realizes that, yeah, that’s the captain, and from that point on, he’s completely on Team Jim. McCoy is actually the first to notice that something’s wrong, but he also is insistent that there be evidence (so is Spock, but he can get his by touching his fingers to someone’s nose and cheekbones), and he hasn’t gotten any yet. Scotty doesn’t come around until he sees Lester being all binky bonkers, and he eventually manages to convince McCoy. Chekov doesn’t come around until Lester calls for the death penalty. And most interestingly, Sulu doesn’t seem to give a damn one way or the other because the only thing that matters to him is that three people have been ordered to their deaths, and there is no way he’ll let that stand, no matter who’s giving the order. And good for him.