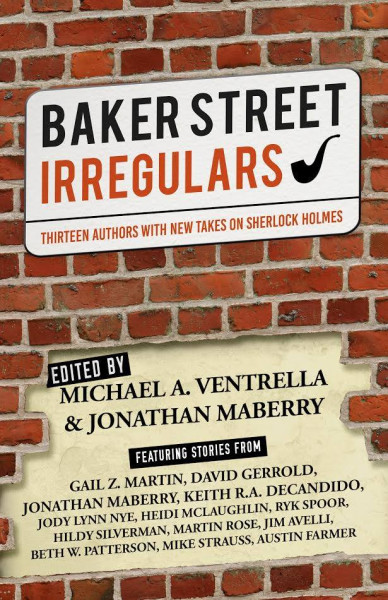 Edited by Michael A. Ventrella & Jonathan Maberry, this anthology features a baker's dozen (ahem) of stories featuring alternate versions of Sherlock Holmes. My own contribution, "Identity," features Shirley Holmes and Jack Watson in modern-day New York City. Other stories include Holmes as the host of a reality show, a doglike alien, a hologram, a vampire, a musician, an automaton, a parrot, and much much more

Here's the full table of contents:

"’Locked!" by Mike Strauss
"Identity (An Adventure of Shirley Holmes and Jack Watson)" by Keith R.A. DeCandido
"The Scent of Truth" by Jody Lynn Nye
"The Adventure of the Reluctant Detective" by Ryk Spoor
"A Scandal in the Bloodline" by Hildy Silverman
"The Fabulous Marble" by David Gerrold
"The Scarlet Study" by Jim Avelli
"Delta Phi" by Heidi McLaughlin
"Beethoven’s Baton" by Austin Farmer
"The Adventure of the Melted Saint" by Gail Z. Martin
"Automatic Sherlock" by Martin Rose
"The Hammer of God" by Jonathan Maberry
"Code Cracker" by Beth W. Patterson

You can preorder the book, which will be released in March, at Amazon, Barnes & Noble, or Indie Bound. We're hoping to have a launch party for the book at HELIOsphere, where David Gerrold, Michael A. Ventrella, Hildy Silverman, and I will all be guests.
Collapse