Everything started out okay. I went down to Greenwich Avenue to get my haircut from Alan, the same guy who's been cutting my hair for three decades. Then I went to McNulty's on Christopher Street to pick up some good coffee beans, and I headed to the Sheridan Square 1 train stop to head to midtown.

That was when it all went to shit.

First off, it's been raining for two days, so it's bleak and wet and awful. The entire city is soaked and water-logged and it's just yucky.

On top of that, the wait for the 1 train was endless. After five minutes, they announced that the next 1 would arrive in 11 minutes. Eleven minutes later, sixteen minutes after I entered the platform, a completely empty 1 zoomed through the station -- it had obviously been taken out of service. Another 1 pulled in two minutes later that was packed, as it had two trains' worth of people on it, and I couldn't even fit into it. Then another 1 zipped by on the express track, skipping my stop entirely. Then, finally, a 1 pulled in, and I took it to 50th Street.

My intent was to check my PO box, which is located under Rockefeller Center. Unfortunately, the cops had barricaded every entrance to Rock Center, only allowing people with ID badges showing they worked in one of the buildings. This was security for putting the tree up, supposedly. The tree has never had anything remotely like this kind of security before (I've had a PO box in Rock Center since 1999, so I know whereof I speak), and somehow I get the feeling that this is the fault of the president-elect.

So I went to a McDonald's that has free wifi and outlets, and I'm drinking a much-needed hot chocolate and bitching about my day to you all on my blog. *wry grin*

Now I get to go home in the middle of rush hour. Sigh.

At least I got a good haircut (and beard trim) out of it: 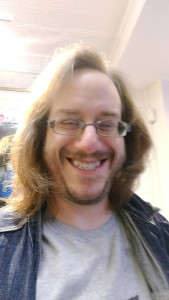