As a bonus, here's another version from 2007, which is worth it for the Santa hats (including Bruce's Santa cowboy hat):

Some time last week -- between Monday night and Wednesday afternoon -- some jackass sideswiped our car and trashed the driver's side view mirror. Wrenn immediately ordered a replacement, which arrived on Friday. Now Wrenn is very talented at DIY stuff, and she'd already replaced the passenger's side view mirror on our previous car, which was also a Toyota Corolla (a 2004, as opposed to our current 2003, but both are basically the same car, as Toyota didn't make any changes in the model between those two years).

However, to do so involves taking the facing off the inner part of the driver's side door, which includes unplugging the console with the buttons that control the power windows and the door locker/unlocker. Everything went fine, the thing went back in -- and then we couldn't plug the fucking thing back in.

This operation was taking place in my parents' driveway, and neither Wrenn nor I nor my father could get the plug going. We tried again Saturday, to no avail.

Finally this morning we took it to our mechanic -- who got it right in in three seconds. *sigh* That was, at once, frustrating and hilarious.......

My lovely fiancée is a woman of many talents, and one of them is crocheting. She has decided to take this skill and put it to good use......

Please do check it out and buy early and often! 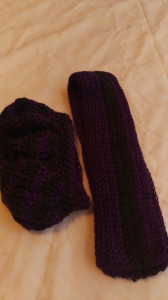 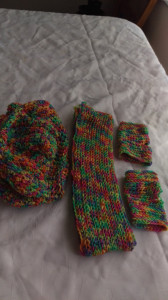