As usual, we did our Christmas Eve celebration at my parents' house. Our new home is on the same block as my parents' place -- that wasn't by design, though we were looking in their neighborhood as well as our old neighborhood when we were apartment hunting in July and August, and we lucked into a great place that's just down the street from them -- so it was a quick commute.....

In the past, it's been the extended family -- my uncles and their significant others, their kids (I have eight cousins, and five of them spent pretty much every Christmas Eve of their childhood at my parents' house), various other friends, family, and hangers-on -- but my mother's bout with cancer has combined with the various cousins growing up and either moving away or starting their own family traditions to have the 24th be simply the immediate family: me, the Forebearance, the Godmommy, and Wrenn and Dale. 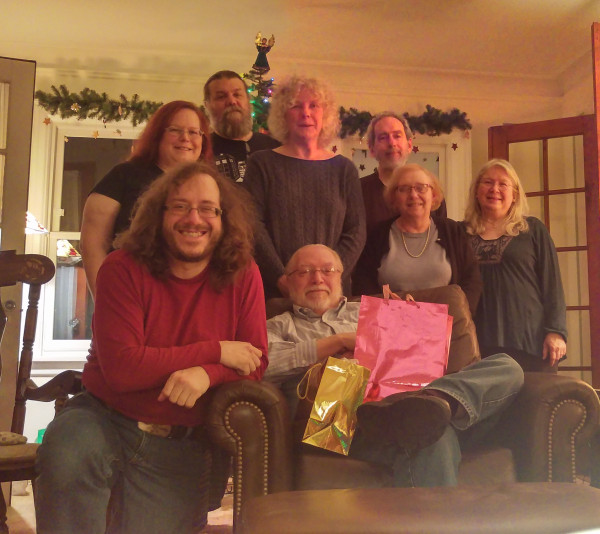 Soup and lasagne were consumed, wine was drunk, presents were opened, dessert was devoured, and a good time was had by all.

We're off today to the Godmommy's place for Christmas Day dinner and more presents! Then tonight it's the now-traditional viewing of the Doctor Who Christmas special.

In other news, I finally finished the edit of Star Trek: Prometheus Book 2 (editing raw translation of German to English is hard work....) and now I have to turn my attention to finishing the thriller. Cha cha cha.

This year of all years, I urge everyone to watch this video. If you've never seen it, you're in for a treat, as two different generations of very different musical heroes team up to sing "Little Drummer Boy." If you have seen it, you'll probably tear up anyhow, since this shitshow of a year started with David Bowie's death. But both Bowie and Bing Crosby live on through their art, including this one time where their art intersected gloriously........