We continue our look back at the 50th anniversary of both Star Trek and Batman 66 with an examination of a William Shatner vehicle that's also celebrating its golden anniversary this year, and also a movie filmed entirely in a constructed language. The TOS Rewatch takes a look at the Esperanto-spoken movie Incubus.

I have to confess that I was surprised to learn that Esperanto is still a thing. Created in the late 19th century as an attempt at a lingua franca that everyone in the world could easily learn and speak, it has utterly failed to be that even a little bit. I think part of the reason is that it was created to be a universal language by an Eastern European opththamologist, L.L. Zamenhof, who had a very 19th-century view of “the world,” which was basically Europe and North America. The construction of the language derives from Romance languages (basically, trying to reunite them into a new Latin), Germanic languages, and Slavic languages. It’s all Europe, more or less, with no influence from the people indigenous to the other continents (though many of the people who currently speak Esperanto are in Asia).

Zamenhof’s hope that it would be a universal second language was stated by Zamenhof himself to possibly take centuries, and it’s a good thing he said that, because it has certainly failed to become that in the 129 years since he published Unua Libro. Supposedly, it’s easier to learn than English—which has become the de facto second language of much of the world, mostly due to British imperialism of the early 20th century and American political and cultural dominance of the late 20th century—but I suspect that’s only true if you’re already familiar with the languages used to construct Esperanto. There’s nothing “universal” about a language that has no roots in either of the two most populous continents on Earth.

One of my goals for 2017 is to revive Dead Kitchen Radio: The Keith R.A. DeCandido Podcast. To that end, the podcast now has its own web site, and I'm in the process of putting links to the 41 extant episodes on there (the first five twelve are up as I type this). Those 41 podcast comprise Volume 1 of DKR, and the first new episode in 2017 will be Volume 2 Episode 1.

I also have a new logo, using the artwork from Without a License: 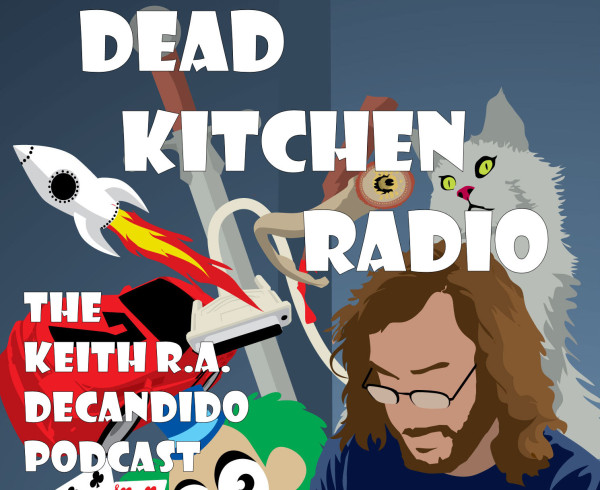 Keep watching this space (or the DKR site!) for more.....

So Carrie Fisher died. Because 2016 had at least one more shot to give us.

Having said that, the other day I was going through my blog entries for 2010 -- I do that sometimes, remind myself of what I was doing at various points -- and I realized something.

A shit-ton of famous people died in 2010, too. At least as many as died this year.

I think the perception of 2016 being particularly brutal is due to how it started: David Bowie and Alan Rickman's deaths were complete shocks that came back to back and were both people to whom their fans were (justifiably) super-devoted. Then Prince died, which was just as big a shock. It set the tone for the whole rest of the year.........
Collapse